Why Use Private Drug Sniffing Dogs Instead of Humans for Narcotic Detection?

Many home and business owners ask us - Why should I use drug sniffing dogs to detect narcotics instead of your current employees or family members? The answer easy: Peace of mind, safety, efficiency, quality, an internal audit ability, and more!

Many people question what is behind a dog’s gift of sniff. We get into everything below. After we are finished explaining, we are positive you will never use a human again to do the work of a purebred, highly-trained narcotic detecting K9.

What gives dogs their gift of smell and how much better is a canine than a human?

According to NOVA Science, dogs’ sense of smell overpowers our own by orders of magnitude—it's 10,000 to 100,000 times more acute, scientists say. "Let's suppose they're just 10,000 times better," says James Walker, former director of the Sensory Research Institute at Florida State University, who, with several colleagues, came up with that jaw-dropping estimate during a rigorously designed, oft-cited study. "If you make the analogy to vision, what you and I can see at a third of a mile, a dog could see more than 3,000 miles away and still see as well.”

This puts into perspective how much more equipped a canine is in sniffing an odor than their human counterpart - it's not even close! 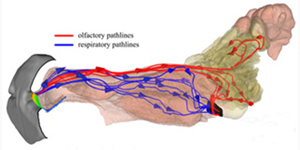 Figure 1:  When a dog breathes in, the air separates into distinct paths, one (red) flowing into the olfactory area and the other (blue) passing through the pharynx (black) to the lungs.

Put another way, drug sniffing dogs can detect some odors in parts per trillion. What does that mean in terms we might understand? Well, in her book Inside of a Dog, Alexandra Horowitz, a dog-cognition researcher at Barnard College, writes that while we might notice if our coffee has had a teaspoon of sugar added to it, a dog could detect a teaspoon of sugar in a million gallons of water, or two Olympic-sized pools worth of water. Another dog scientist likened their ability to catching a whiff of one rotten apple in two million barrels. 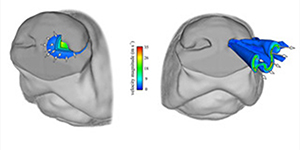 Clearly, these are some astonishing facts. A human can take hours going through all the drains, rummaging through your client's clothing and personal effects. Drug sniffing dogs can easily sniff around and non-intrusively detect any illicit substances that may be present.

We now know a canine’s sense of smell is at least 10,000 times that of a human. What does this mean for you? Peace of mind. A priceless stress reducer that will keep your business safe. With our deterrence program, we can assure you that no stone will be left unturned and your business will be a safer place to operate effectively. Our drug sniffing dogs are trained with the best skills in the county. Work with us today! 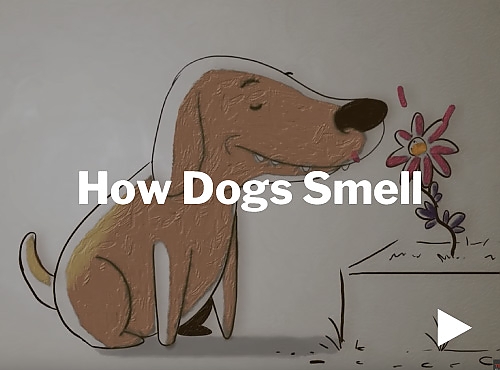